A boycott of advertisers on social media is gaining momentum, and Facebook is the primary target. Marketers are expressing unease with how it handles misinformation and hate speech, including its permissive approach to problematic posts by President Trump.

Who’s doing what. The boycotts have followed a call by the advocacy group Stop Hate for Profit, which is keeping a running list of participating companies. Over the weekend, Starbucks and Diageo said they would pause advertising on all social media platforms. They’re among the biggest spenders on Facebook ads: Starbucks spent $95 million and Diageo $23 spent million on the platform last year. Other companies have boycotted Facebook specifically, including Honda America, Levi Strauss and Patagonia.

Who’s next? Procter & Gamble, the world’s largest advertiser, said it wouldn’t rule out a pause on Facebook ads. (Its big rival, Unilever, is stopping ads on Facebook, Instagram and Twitter through the end of the year.) Big ad agencies generally take their orders from clients, but they also have leeway to steer spending to certain platforms over others.

• Claiming censorship by major social media platforms, many right-leaning pundits, lawmakers and others have decamped to the upstart network Parler. That may cost Facebook some high-profile users — and an outsized source of engagement on its platform.

Can Facebook turn it around? Its stock price tumbled last week, as ever-bigger advertisers joined the boycott. (It’s poised to fall at the open today.) On Friday, it rolled out new measures to flag problematic political posts and expand its policies around hate speech.

• It’s worth remembering that Facebook collected more than $17 billion in advertising revenue in the first quarter alone: Losing big brand ads is painful, but the bulk of the company’s sales come from millions of smaller businesses that rely heavily on the platform. 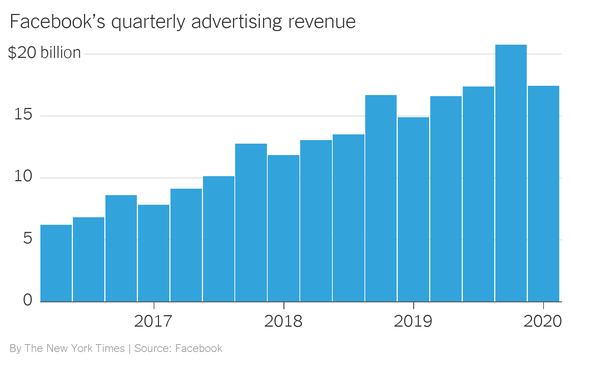 The spotlight is now on Mark Zuckerberg, who holds all the power at Facebook. His complicated relationship with Mr. Trump is at the center of the controversy, and how it plays out will determine how damaging the boycott will be for his company. Here’s what Andrew has to say about how it could play out:

Mr. Zuckerberg is often criticized for policies that are viewed by his detractors as unprincipled and craven, driven by business interests more than any moral code. But the truth, based on my years of reporting on him, is that his policies have always been driven less by profits and more by an overarching view of what he thinks is right. (Even when he is arguably wrong).

If he were always trying to placate advertisers, the boycott wouldn’t have happened. Of course, you could argue that his recent reversal on misinformation is proof of malleable principles. (By extension, his prior permissiveness could be seen as placating the Trump administration in hopes of keeping regulators at bay.) But I think it is fair to say that anyone who knows Mr. Zuckerberg knows that he believes in his positions — until he is forced to abandon them.